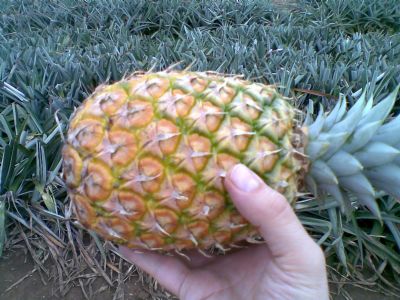 Spain is net exporter of fresh fruits with a volume of 5.1 million tons of fruit exported in 2008 and a value of 4.3 billion EUR in 2008 according to the Spanish Institute of Statistics.
Main fresh export products are by far citrus , with 3.1 million tons exported, melons and watermelons (0.7 million tons), peaches and nectarines (0.5 million tons), apples and pears(0.3) berries (0.2), and grapes (0.1 million tons) in 2008.

In terms of destination, 92% of all fresh fruit exported arrived into the EU market, both in volume and in value. Main destination is still Germany with about 25% of all exports, followed by France and the UK. Outside the EU, Russia, Switzerland , Norway and the USA are the main destination

At the same time the Spanish population, with 45 million inhabitants, is also a significant consumer of fresh produce. This consumption is to a large extent produced locally, but Spain is also a large importer of fresh fruit off-season. A volume of about 1 billion tons of fresh fruit with a value of 0.9 billion EUR were imported in 2008, according to the Spanish Institute of Statistics.

In terms of origin 66% of all fresh fruit imported into Spain arrived from non-EU countries, both in volume and in value. Main supplier countries were Argentina Ecuador, Costa Rica, Chile and Brazil. Morocco is the ninth Spanish fresh produce supplier with 5% in volume. Among the EU countries, France is the main supplier, followed by Italy.

On tropical products, Ecuador, followed by Colombia and Costa Rica are the main non-EU banana suppliers. The main pineapple supplier is still Costa Rica, Brazil for mangos and Peru and Chile for avocados.
These figures indicate the significant flow of perishable produce in and out of Spain and the capacity of Spain as a producer and exporter.


Opportunities for export and imports
The EU is still the main receiver of Spanish fresh fruit (with 92% of all exports) This fact reveals a remarkable opportunity for Spanish exports into marketing outside the EU, particularly those with purchasing power and demand for fresh produce. Among those the Gulf countries are excellent candidates for produce export. Similarly , the USA is already an importer of Spanish clementines and could be importing other high quality fresh produce items from Spain.

Similarly as a large consumer, Spain presents opportunities for non-EU countries to bring their produce in the winter months to a Spanish consumer that demands year-round supply. Examples of exporting countries with large potential are Senegal, Peru and Chile.

The major barriers today to the increased exports and imports for Spain , apart from commercial considerations of supply and demand, are the distance from the areas of production and the length of the ocean shipment. As airfreight becomes prohibitive in its cost and with increased environmental pressure for CO2 emissions, sea freight is the viable option for shipping fresh produce over long distances. Since shelf life of produce is limited, there is a big opportunity in utilizing transport and storage technologies that delay the degradation of fresh fruit during transit.

One of the main technologies is controlled atmosphere, (CA), which consists in a reduction in the oxygen ( and sometimes increase in CO2) around the fresh produce. This change in the atmosphere is controlled actively in the reefer container and slows down the respiration activity of fresh produce. This technology is already being used for some years for some products, such as banana and apples, but has not been sufficiently developed for many other products.

Ethylene absorbents are another alternative for improved storage and transport, especially for those products that generate ethylene, the ripening hormone, or are sensitive to it. Similarly. air disinfections to reduce spore count and decay in transit is another real possibility to improve quality at arrival. Ozone purifiers provide this possibility.

These technologies can be used to open new transport areas or to improve quality results and reduce losses at arrival. However, these technologies need to be implemented after analysis of the existing production condition, coupled with transport and storage chain. Fruit shelf life varies from location to location and it is the knowledge of initial shelf life that allows the application of the right technologies to the right product.

In summary, there is a real market opportunity for Spanish exporters to sell fresh produce to lucrative markets outside the EU, if they use the right transport and storage technologies.
Similarly, there is also a large opportunity of non-EU exporters to bring off-season produce into Spain, provided the quality at arrival and the transport chain is designed carefully. These opportunities can be seized with the proper analysis of the cold chain and implementation of the right technologies and processes.

Fruitprofits is active in EU, North Africa and Latin America