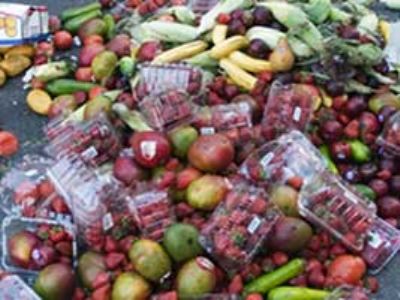 According to a report by the Food and Agriculture Organization of the UN, the main losses are connected to the production of fresh produce. 20% of the fresh produce is lost due to among others: accidental damage during threshing or fruit picking, damage by insects, mechanical damage and/or spillage during harvest operation and crops sorted out post-harvest following quality requirements by supermarkets and other companies. The lack of tuning between supply and demand is another reason for losses

During postharvest handling and processing 5,5% of the fresh produce gets lost, by for example bad storage conditions, juice production, or during process interruptions and accidental spillage. In the distribution chain and supermarkets another 7,5% is being lost due to degradation and expiring 'best-before-dates'. Not all losses are irreversible because a lot of effort has increasingly been put in the valorization of these products. In fermentation installations unmerchantable fresh produce can be transformed into energy. Slightly damaged fresh produce can also be used to make derived products as jam, soup,…

Finally, 13% of what is initially produced gets lost due to consumers behavior by throwing away still edible fruits and vegetables, or by wasting due to storing the fresh produce too long or at a wrong temperature.

Within the European Project Veg-i-Trade, scientists of Ghent University and Wageningen University try to reduce the losses within the fruits and vegetables chain. This, by developing statistical models to predict the degradation and the safety of fresh produce. These models can be used to improve the planning and logistics of food processors, transporters and supermarkets. By adapting for instance the size of the produced batches of food, the amount of stock and the storage conditions for example; less food will be lost.

Also the consumer can help to reduce the losses. Some tips: by eating seasonally fresh produce will not have to be transported for a long distance, so it can be stored longer. A weekly leftover day helps to reduce the leftovers, and buying and cooking not more than necessary will obviously reduce losses.

This research is part of the European project 'Veg-i-Trade'. Since May 2010, 23 international partners are investigating viruses, bacteria such as E. coli., mycotoxins, and pesticide residues on fresh produce. Veg-i-Trade studies the possible impact of globalization and climate change on the food safety of fresh produce. The project is being coordinated by the Department Food Safety and Food Quality of Ghent University (Belgium) and has partners from universities, research institutes, SMEs to large industrial partners in 10 different countries.